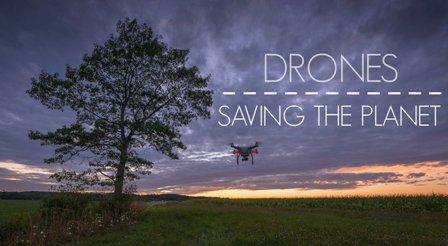 There are plenty of ways that drones are being used beyond purely commercial operations. Some of them are even doing some good to the planet. Here are five ways drones are saving the environment.

While plenty of people in the industry know about the use of drones for infrastructure inspection, many don’t realize just how vital aerial technology is proving to be in emerging renewable energy projects.

One example of this is with solar farms. Drone inspections are keeping large-scale solar energy projects running around the world. And mapping capabilities are assisting solar companies in the planning and building of solar farms. In short, drones are helping solar projects get off the ground and stay there.

Speaking exclusively to DroneLife was a spokesperson from French UAV operator Dronotec.

“Solar electricity production capacity is growing fast: The plants are larger, bigger and beyond the kind of scale that humans can handle.”

But as well as saving valuable time and money, drones offer a safer way to inspect panels in what are notoriously brutal locations.

“Traditional inspections conducted by humans in the field take a long time. On top of that, to properly inspect solar panels for defects, the best time to do it is when the sun is at its most powerful. This involves risks for the workers, especially when performing tasks in a remote area.”

So how does a drone inspection of a solar farm work? Well, the key is the thermal imaging camera that can relay footage back to a team on the ground. As you can see in the video above, the images captured can pinpoint areas that are damaged or broken from above.

“Using a drone you can map an area, detect invasive vegetation, spot dust on the solar panels and other problems that might occur (after strong wind for example). Thermal imaging can also detect defective panels that are overheating.”

“Using collaborative mapping tools like DroneDeploy, you can report and localise the defect and share your map with the the team on site.”

Using a thermal imaging camera/drone combination allows solar farms to “drastically reduce time on site and the exposure of workers to risks”.

It’s clear that drones offer a significant ROI for solar farms and other renewable energy projects. Here’s to aerial technology giving a leg-up to more environmentally friendly sectors in the future. Aeromon, mapping industrial emissions from above.

When we think of mapping it’s often in relation to real estate or agriculture; developing an in-depth view of an area that can be used for planning and modelling.

But one startup in Finland, Aeromon, is instead mapping something less tangible than land: industrial emissions. It has built a drone and software platform capable of tracking invisible gases from above.

And it’s not been easy. In order to accurately map gases as they enter the atmosphere, Aeromon team has developed a sophisticated sensor package, ‘BH-8’, which can be attached to a drone to capture data in the field.

A connected analytics platform takes the information from these airborne sensors and lets plant operators and regulators map emissions in real-time.

With emission targets being set around the world in a bid to slow down global warming, it’s easy to see how technology like this can help governments and authorities keep factories and fossil fuel companies in check.

Aeromon chairman Jouko Salo certainly thinks his company has found a niche in the growing drone market. “With emissions monitoring legislation tightening across the globe, the need for reliable fugitive emissions detection solutions is increasing,” he said.

Stopping Poachers in Africa and Nepal

We can all agree that the natural world is something that should be cared for and preserved. And that includes wildlife. Wild animals in Africa are vital to the lives of many people living across the continent. Not only do they rely on animals for basic survival, but Africa’s animals are also a huge driver of international tourism. Without them, whole communities would struggle.

But we all know that illegal poaching is causing the numbers of certain animals to dwindle to the point of near-extinction, including elephants and rhinos. One tech startup, Air Shepherd, is using drones to stop this from happening.

The organization uses drones to capture evidence and survey huge areas of land. Not only does they help provide the proof that results in convictions, they also actively repel poachers on the ground.

“The planes are small but their impact is enormous,” says team member Robert Hannaford in the video above.

Drones are also helping with animal conservation efforts in Nepal. Check out the video below, which outlines a program that uses autonomous drones to look for endangered animal populations and generally survey wildlife.

In difficult-to-reach locations, this is usually a labour-consuming and costly process, but drones allow local conservationists to keep a finger on the pulse of local wildlife with ease.

They can also monitor illegal logging activity and map landscapes in their entirety. This allows conservation teams to keep an eye on the progression of the land over time, and ensure that farms, plantations and poachers don’t disrupt wildlife and the environment.

It’s common knowledge that drones and agriculture are a match made in heaven. Not only do they allow farmers to assess crop health from above in a more cost-effective and efficient way than ever before. They also offer the promise of automating much of the manual labour that goes into agricultural work. Drones such as the DJI Agras could one day be a mainstay on farms around the world, autonomously spraying crops with fertiliser and pesticides.

But an equally important factor is the benefit that drones have on agriculture from an environmental point of view.

By empowering farmers to use their land as efficiently as possible, drones can help to keep the necessary industry of agriculture free from waste and environmentally damaging practices.

For example, a research team at Timiryazev State Agrarian University in Moscow published a study in which a drone was used to map terrain for a wheat fertilisation project. The resultant map was used to optimize their nitrogen application, leading to a 20% reduction in the amount of nitrogen put into the environment.

Water pipes in the desert are vital for people living in hot and remote locations.

When you hear of drones and pipeline inspection, you probably assume that we’re talking about oil and gas. But another vital resource, water, is also being monitored by drones.

Equipped with infrared cameras, drones are being trialled in hot and remote locations, to detect leaks in underground water pipes in the desert. Research led by Professor Amin Al-Habaibeh at Nottingham Trent University in the UK aims to prevent water loss using infrared technology to spot leaks that are invisible to the naked eye.

Professor Al-Habaibeh, Professor of Intelligent Engineering Systems, said: “Water is one of the most precious commodities around the world, but significant quantities are lost on a daily basis through leaking and broken pipes.

“What we are proposing is a non-contact and high-speed system that can be used remotely to detect changes in humidity over vast areas of desert.”